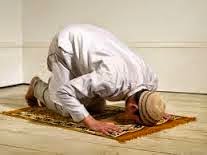 Prayer five times a day is one obligation for Muslims. Prayer is not only becoming a major practice in the hereafter, but it turns out prayer movements are proportional to the movement of the human anatomy. Even from the medical side, the prayer is a storehouse of drugs from various diseases.

During this prayer is performed five times a day by Muslims, has actually deliver health investment is large enough for the prayers. With regards to the prayer movement has tremendous significance both for physical health, mental and even spiritual and emotional balance. But unfortunately only a few of the Muslims who understand.

Here are some benefits of prayer movement for human health:

Takbiratul ihram. Posture: stand up straight, lift both arms parallel to the ear, then fold it in front of the abdomen or lower chest.

Benefits: This movement blood flow, lymph and arm muscle strength. The position of the heart in the bottom of the brain allows the blood to flow smoothly to s! Mangasi body. When raised both arms, shoulder muscles stretched so that the flow of oxygen-rich blood to be smooth. Then both hands in front didekapkan abdomen or lower chest. This avoids the attitude of various joint problems, particularly in the upper body.

Bow. Posture: the perfect Ruku marked spine straight so that when placed on a glass of water that will not spill back. Head position with the spine straight.

Benefits: This posture perfection maintain the position and function of the spine (vertebrae corpus) as the body and central nervous buffer. Heart position parallel to the brain, the blood flow is maximal at the center of the body. Hands resting on his knees for muscle relaxation function - down to the shoulder muscles. In addition, the bow is urinary exercise to prevent prostate problems.

I'tidal. Posture: Waking up from bowing, after the body back upright, both hands raised as high as the ears.

Benefits: Itidal is a variation of posture after bowing and before prostration. Motion stood stooped standing practice of prostration is a good digestion. The organs of the digestive organs in the abdominal massage and relaxation experience alternately. The effect, digestion becomes more fluent.

Prostration. Posture: prostration by putting both hands, knees, toes, and forehead on the floor.

Benefits: The flow of lymph is pumped into the neck and armpits. The position of the heart over brain causing maximal oxygen-rich blood to the brain bisamengalir. This flow effect on one's thinking. Therefore, do prostrations with tuma'ninah, do not rush - hurried sufficient capacity so that the blood in the brain. This posture also avoid interference hemorrhoids. Especially for women, both bowing and prostration have tremendous benefits for fertility and health of the female organs.

Sitting. Posture: Sit there are two kinds, namely iftirosy (tahiyyat early) and tawarruk (tahiyyat end). The difference lies in the position of the feet.

Benefits: When iftirosy, we rely on the groin nerves connected to the nerve Ischiadius. This position is to avoid pain in the groin which often causes the sufferer was unable to walk. Tawarruk sit very well for men because the heel to suppress bladder (urethra), male sex glands (prostate) and the channel of the vas deferens. If done. correctly, posture irfi prevent impotence. Variations in foot position on iftirosy and tawarruk cause the entire limb muscles also stretch and then relax again. Harmonic motion and this is keeping the pressure. flexibility and power of the organ - the organ of our motion.

Salam. Movement: Rotate the head to the right and to the left to the fullest.

Benefits: Relaxation of muscle around the neck and head improve blood flow in the head. This movement prevents headaches and keep the facial skin firmness.
Worsip basis, not just continuous nourish faith, but women beautify themselves outside and inside.

Prostration in prayer movement is unique. His philosophy is the human subject themselves as low - low, even lower than his own ass.

From the point of view of the science of psychoneuroimmunology (the study of the body's immune from the psychological standpoint) that explored Prof. Sholeh, movement, lead man on the highest degree - high.

Why? By doing regular prostration movement, blood vessels in the brain is trained to accept a lot of blood supply. At the time of prostration, the position of the head is above the heart that allows blood flow to the brain is maximal. That means, the brain get oxygen-rich blood supply that stimulate the cells.

In other words, prostration which could spur continuous tumakninah and intelligence. His research has received recognition from Harvard Universitry, USA. Even an American doctor stating stranger to Islam after secretly conducted research specifically on the development of prostration movement.

Movements in the prayer-like yoga or stretching. The point is to flex the body and blood circulation. The advantages compared to other movements prayer is prayer move more limbs, including the toes and fingers.

Prostration is strength training for specific muscles, including the muscles of the chest. When prostration, the load on the upper body arms pinned to the palm of the hand. When this occurs in the chest muscle contractions, the body that became the pride of women. Breasts not only become more beautiful shape, but also improve the function of the milk glands in it.

Still in pose prostration, other benefits can be enjoyed by women. When the hips and waist and lifted over the heads of the chest, abdominal muscles (rectus abdominis and obliquus abdominis externuus) full contract.

This condition train around the abdominal organs to push deeper and longer. This is advantageous because the woman in labor is needed breathing good and sufficient straining capabilities.

When the abdominal muscles have evolved to become bigger and stronger, so naturally he was more elastic. Prostrate habit can cause the body to restore and maintain organs - the abdominal organs back into place (fixation).

After the prostration is seated movement. In prayer there are two types of posture, which sitting iftirosy (tahiyyat early) and sat tawarruk (tahiyyat end). The most important thing is also berkontraksinya perineum muscles.

For women, this is the most protected area because there are three holes, which burrow mating, anus to remove the dirt, and urinary tract.

When sitting tawarruk, left heel must press the perineal area. Instep should be placed on the left foot and the heel of the right foot should press the right groin.


In this position the heel of the left foot will be massaging and pressing the perineal region. This gentle pressure repair of reproductive organs in the perineal area. With prayer, God willing, our lives healthy.
Posted by Unknown at 11:25 PM